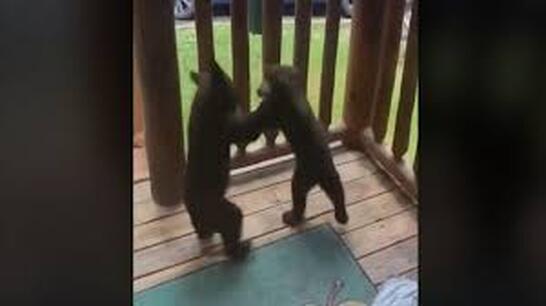 "IN 2021...WE'LL GET IT DONE!"
If the great Ernie Banks was still with us, this might be the kind of thing he'd say at the start of the season.  Do you have a similar poetic expression you'd like to share?  Don't be shy...let's hear it! 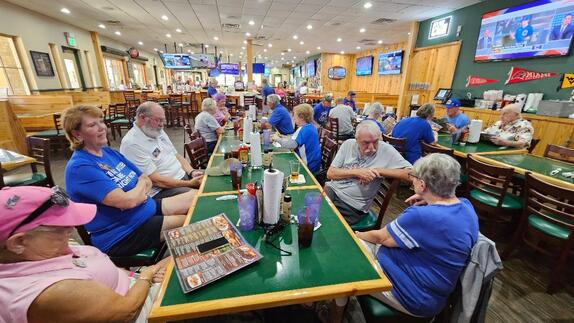 WATCH PARTY BRINGS TOGETHER FRIENDS...BUT NOT A CUBBIE WIN
by Dan Marx
You could see the excitement in all of the members’ eyes. It was opening day, and “wait till next year” was finally here. And, we were playing the Pirates !
For the first time ever, Cubs World congregated for their game watch at LaHacienda Rec Center instead of in a restaurant. We were socially distanced, we played our games ( pick a Cub, guess the score, etc. ) and we struck up old friendships.
And then the game started. Rizzo got a hit in the first, and then................ there wasn’t a hit for a long time. We couldn’t even get a hit off of a closer who had a 7.11 ERA last season. And Hendricks - his pitching was as bad as our hitting. BUT, we did execute a good pickoff play.  Final score Pirates 5 Cubs 3.    Cubs hits 2.
Anyways, that’s why they play the other 161 games.
Go Cubbies! 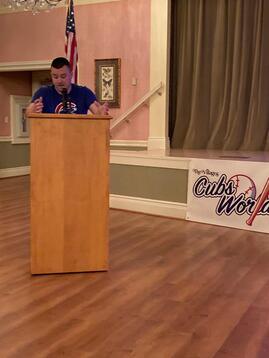 Cubs World members were treated to a terrific meeting with 2 of the biggest local sports personalities in The Villages. Daily Sun award winning sports reporter, Cody Hills, and the head baseball coach for The Villages Charter School, Brady Bogart.

Cody, who is a great friend to Cubs World, gave us his annual projection as to how the Cubs would do this season . He believes that the Central division is not a very strong division, and he feels we should win at least 85 games and have a real good shot at getting into the playoffs.

Cubs World members were treated to a terrific meeting with 2 of the biggest local sports personalities in The Villages. Daily Sun award winning sports reporter, Cody Hills, and the head baseball coach for The Villages Charter School, Brady Bogart.

Cody, who is a great friend to Cubs World, gave us his annual projection as to how the Cubs would do this season . He believes that the Central division is not a very strong division, and he feels we should win at least 85 games and have a real good shot at getting into the playoffs. 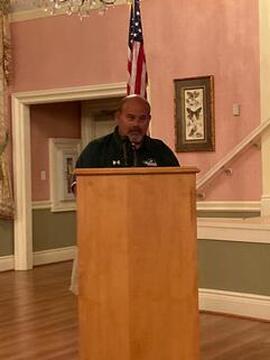 Bogart loved coming in to talk baseball with us. He has had a very successful run since he took over as manager for the Buffalo. He is very  high on fundamentals with his players. His 5 most important parts of the game which he impresses on his players are pitching, hitting, defense, base running and bunting. He expects his players to hustle all of the time.

All 3 of his sons have gone on to play college baseball, as has his one daughter. Brady himself was a pitcher at St. Leo’s University, and related a story of how he proposed to his girlfriend in the 7th inning of a game that he was pitching in.

And ask any member who was at the meeting and they can tell you why the Cubs were named the Orphans at one time, thanks to Jim Gulesarian’s Let’s Play Too segment.
​ 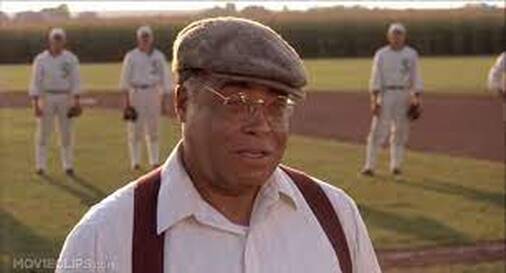 REFLECTIONS
by Dan Marx
People will come, Ray. They’ll come to Iowa for reasons they can’t even fathom. They’ll turn up your driveway not knowing for sure why they’re doing it. They’ll arrive at your door as innocent as children longing for the past.

“Of course we won’t mind if you look around”, you’ll say. “It’s only $20 per person”. They’ll pass over the money without even thinking about it. For it is money they have and peace they lack.

And they’ll walk out to the bleachers, and sit in shirtsleeves on a perfect afternoon. They’ll find they have reserved seats somewhere along the baselines, where they sat when they were children and cheered their heroes. And they’ll watch the game , and it’ll be as if  they dipped themselves in magic water. The memories will be so thick, they’ll have to brush them away from their faces.

The one constant through all the years, Ray, has been BASEBALL! America has rolled by like an army of steamrollers. It’s been erased like a blackboard, rebuilt, and erased again. But baseball has marked the time. This field, this game— its a part  of our past, Ray. It reminds us of all that was good, and it could be again. Ooooooh people will come , Ray. People will definitely come.

Thank you all for indulging me. This is my favorite sports movie (Field of Dreams), and I post this soliloquy by Terrence Mann ( James Earl Jones) every opening day on my Facebook page. Think about how we loved baseball when we were kids. Many of us played until it was too dark to play. Most of us knew not only all of the names of all of the Cubs, but we knew just about every player in MLB.

During our adult lives we had so many responsibilities- being a parent, making a living, the upkeep of a house etc. We still loved our Cubs. We saw as many games as  possible, but so many things got in the way that the love of the game might have taken a little bit more of a backseat to us then what we wanted .

Fast forward to The Villages and the retirement years. Are we now the innocent children longing for the past?  Have we been dipped in the magic water? And do we even want to brush any of those memories away from our faces. Do we see the double play combination of Ernie Banks and Gene Baker? Do we hear Jack Brickhouse broadcasting a Ron Santo or Billy Williams home run? And do we see this in black and white, or in color?

I think that we do look at baseball in a whole different light at our age now. And, I, for one, am very happy to have Terrence Mann remind me of it every year.

Are you seeing baseball through a different lens now? We’d love for you to share your thoughts. 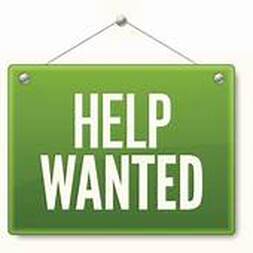 The Cubs World Dinner Team
From it's very beginning Cubs World saw itself as more than a fan club.
It's a social club, helping like-minded Villagers become friends.
One of the best ways to build friendships is to share a meal together.
Two couples stepped forward to make this a part of every meeting:
Jan Jackman      Karen Parris
Ken Suchy          Bob Smith
They tested restaurant menus, ordered meals, and sometimes served them buffet style.  In a show of gratitude the club recognized them with
it's annual All-Star Award.

Covid caused the unfortunate cancellation of most of our club meetings
in 2020.  But exciting meetings are being planned in 2021, including the
sharing of dinner at the start of club meetings again.

Our Dinner Team served us from the beginning days of the club and but
would like to step aside to give others a chance to manage this important
part of club life.

Please contact club President Donald Mulder if you are interested in this
unusual way to contribute to club success.
DRMulder@aol.com
847-372-7244