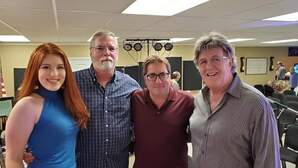 GODIVA (obviously shown on the left) is a break out talent if there ever was one!  This 17 year old singer is a natural on stage.  Next is Mike, an amazing bass player, yours truly and finally Terry.
​ 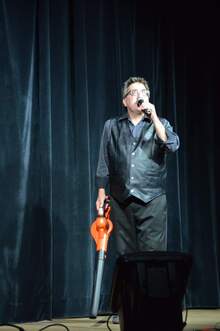 This leaf blower and I have become close friends.  Earlier this year, I wrote and performed a comedy routine about life in the Villages.  It went over so well I have performed the same routine at various showcases.
I will forever be stuck with the promotional pose you see here.  It strikes me funny that in fifty years of performing and composing...a little comedy bit I wrote in one hour has taken off like wild fire!  This is the pure definition of show business.  You aim at one target and completely hit another!
Actually, developing the bit took no time at all.  But, the backing tracks I developed took well over a month to complete.  It was worth it.
​  I now feel confident doing comedy on stage and I look forward to any opportunity that might arise in the future. 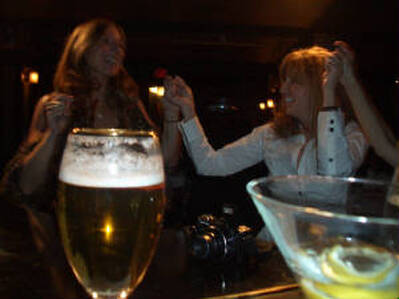 One of the greatest gigs of my life was spending well over a decade performing at BIG SHOT PIANO LOUNGE AND RESTAURANT located in Arlington Heights, Il.  It was more of a piano bar.  It was a gathering place for friends.
I particularly got a kick out of bachelorette parties.  I've seen some crazy things transpire during these celebrations.  Many party goers would leave me some kind of souvenir.
One evening, the guest of honor gave me the centerpiece which was a giant YOU KNOW WHAT made out of chocolate.  This was the GOOD chocolate one would find in those candy cigarettes we all consumed as kids.  I started eating it in the car on the way home!  Don't worry.  I cut it into little pieces first. 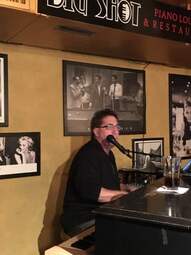 Did you know that the piano at Big Shot Piano Lounge and Restaurant was really a digital placed inside the shell of an old baby grand?
Since most of the acoustic pianos I've played haven't ben tuned or fixed since Lincoln gave his address, these digital additions are an absolute Godsend.
Many thousands of years ago when my career began picking up speed in downtown Chicago, I received my first major review...I believe written by someone from the Chicago Tribune.  In any case, he complimented me on my voice and ability to perform, which was much appreciated.  However,  his review suddenly transcended into a strange rant about the digital keyboard I used on stage.  In so many words he condemned ALL digital instruments and proclaimed that they would never be a force in the music industry.  OOPS! 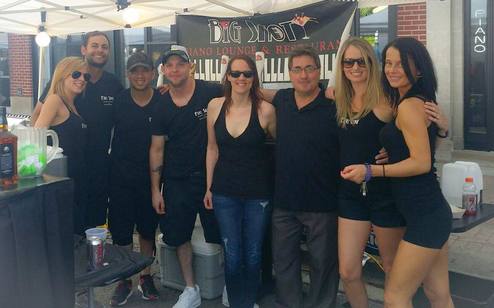 Three of the people in this photo are actually my bosses, two are no longer on staff, one is a waitress and the other is a former waitress from Seasons 52 and one guy is a performer.

Glad to provide such details!
AGA..on the far right...is now a professional model. 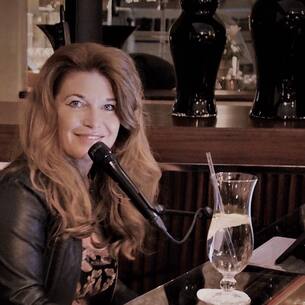 If you'd like to watch Jessica Wimert in person, you'll have to take a trip to Stockholm, Sweden.

You might find her entertaining at the famous Grand Hotel or any number of casinos across the country.

Her recordings are available on I-Tunes and I am looking forward to her giving life to one of my songs, LOST IN GAMLA STAN TONIGHT.

Thank you Jessica for your friendship and unsurpassed artistry. 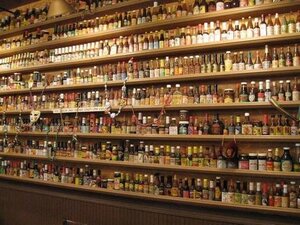 From time to time, I have had the honor of filling in for my buddy Sami Scot at HEAVEN ON SEVEN in Naperville.

I was once told the number of bottles on the wall, but I cannot remember what it is.  I wouldn't be surprised if the number hasn't grown through the years.

​It is rather unfortunate that this fine Naperville venue closed its doors in December of 2017. 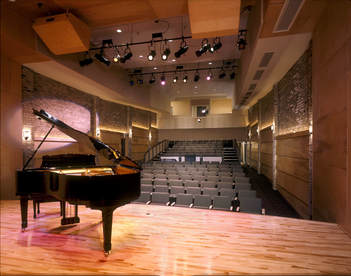 The Skokie theatre, despite its small size, is a state of the art gem featuring concerts, plays and other events.  Having been in some productions during the past couple of years, I have grown rather fond of this haven dedicated to live entertainment.
In march of 2018, I had the honor of performing a concert designed as a retrospective of my 50 years in the business.  To be honest, it always felt a bit strange performing on this stage looking out at the audience.  I sat out there as a young child when the Skokie was a movie theatre.  I, along with other noisy obnoxious brats, attended the Saturday Kid shows featuring cartoons and lame feature films.
The area where some kids sneaked in is now a dressing room. 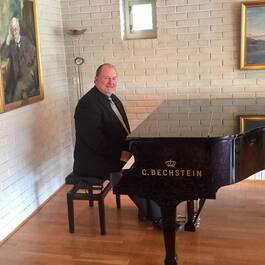 MY buddy BUDDY in Norway.  He is an amazing piano lounge artist.  In fact, I think he is one of the top ten performers of his kind in the world!  He can be serious...playful  and rides the mood of the audience like a skilled surfer.

I first met him at the Reisen Hotel in Stockholm, Sweden.  I was performing nearby at the Sheraton and since my gig finished on the early side, I was able to run over for his last set.

He has alot of insight as to what is involved with regard to expatriating from America.  He is fun to be around! 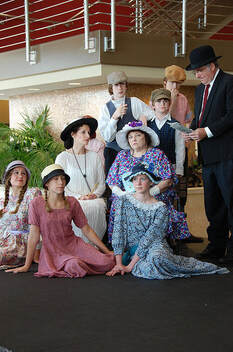 Cast members from the 2012 production of my musical, A SUMMER STORM.  It is a bit difficult to explain people that this presentation was rendered in a car dealership!  I'm not kidding!  But the amazing thing is that the stage was spectaculer and the acoustics were so good, we didn't require a sound system.  We couldn't afford one anyway.
But, we had magnificent performances in front of full capacity crowds!  It is a moment in my career I shall never forget!
MUCH MORE TO COME....
​