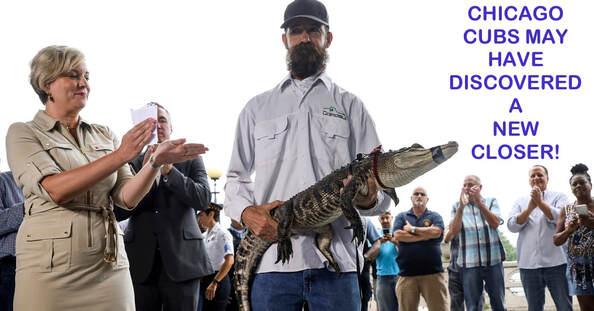 It took a Florida man named Frank Robb to rescue Chicagoans from the terrors of an alligator on the loose.  A grateful city has been honoring this humble soul in many ways, including an appearance at Wrigley Field to throw out the first pitch.
Ricketts, Maddon and Epstein were impressed by his form on the mound as he stood erect, kicked and delivered a pitch right into the sweet pocket!
Rumors have been floating around that since he so easily closed the mouth of "CHANCE THE SNAPPER", he would serve as an excellent closer for the Cubs.  He already dons a fashionable beard and looks great in a Cubs uniform...so WHY NOT? 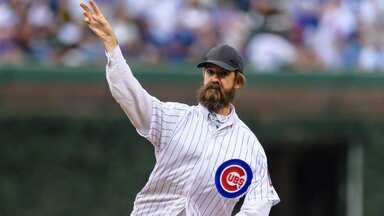 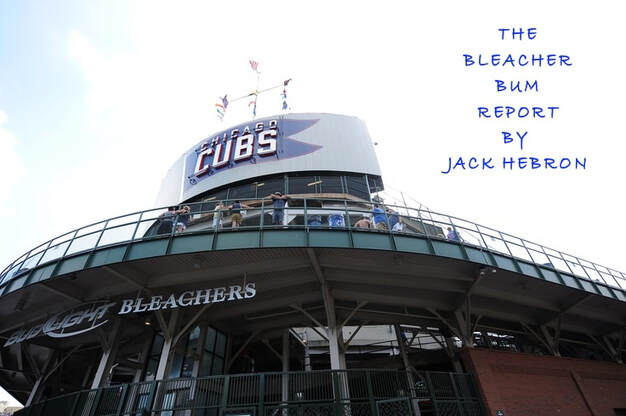 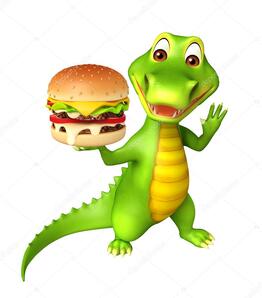 JULY WATCH PARTY ENTERTAINED 60 MEMBERS AT BROWNWOOD GATORS
Our Cubbies put on a power display at the latest Cubs Watch at Gator's Brownwood Sunday , 7/28. The Brewers wished that they had spent more time in church praying on Sunday, than taking batting practice.

Kyle Schwarber was a one man wrecking crew with a grand slam and a 3 run homer to demolish the Brewers 11-4. Jim Gulesarian  was  happy to see that, as he easily won the Pick the Cub contest. Also there was a pick the final score game, and the 50/50 raffle. We had a turnout of over 60 members , and they all went home happy. 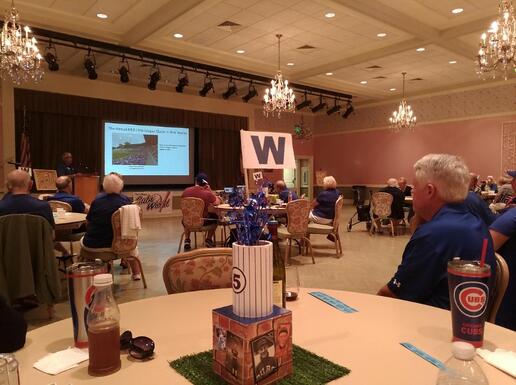 AUGUST MEMBERSHIP MEETING FOCUS ON LITTLE LEAGUE CAPTIVATED AUDIENCE
About 60 Cubs World members met at Colony Cottage to enjoy a turkey dinner followed by a host of topics for the night. Many of us were challenged with some Cubs trivia from Sam "toothpick" Jones to who threw the first Cubs no-hitter. We all enjoyed some short videos about little league baseball and those people who collect pins and trade them.
Cubs World President Don Mulder surprised all those who attended with their very own Villages Cubs World collector pin. Bill McMahon was the lucky winner of the 50/50 raffle. Rumor has it someone heard him say "Shhhhh, don't tell the wife, I need a new baseball glove!"
The next Cubs World group meeting will be the first Monday in October. Let's hope our Cubbies will be in the playoffs when we all get together again! Go Cubs!   (THANKS TO  HONEY BAKED HAM FOR AN OUTSTANDING CULINARY CONTRIBUTION!) 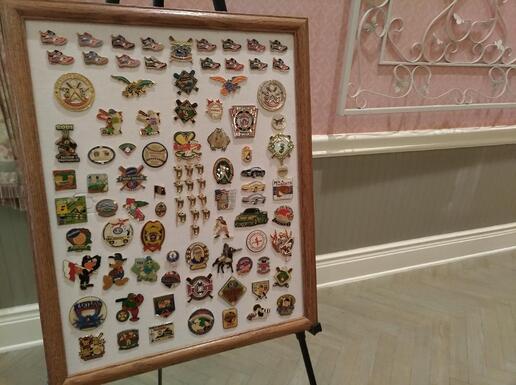 SPECIAL PIN DISPLAYS FASCINATED CUBS WORLD MEMBERSHIP!
The August membership meeting  featured
beautifully adorned displays of LITTLE LEAGUE PINS scattered about the hall for fans to peruse.  This collection was very impressive and even inspirational in the sense that it reminds us of the generational importance of baseball.

A SPECIAL REPORT FROM DON MULDER!
"In our August Member's Meeting we learned that trading pins has been a tradition at the Little League World Series for over 50 years
whereas Disney has been selling trading pins for just 20 years.

And a trading pin of the Cubs World logo was given to every member of the club at the meeting. (photo)

These are great conversation pieces on hats, collars, golf cart curtains.... and anywhere else you want to put them.

Henceforth, whenever a member joins the club or renews a membership they will receive a FREE CubsWorld pin.
They will also be available at the Member Services Desk during Member's Meetings for a contribution to the club of $2." 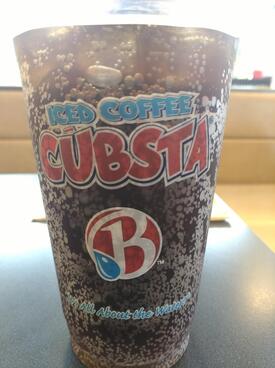 HOW DO YOU KNOW YOU'RE A TRUE DIE-HARD CUB FAN?
You see the Cubs pop up everywhere...even at a NEW YORK STYLE DELI!  The Brooklyn Bagel Shop out in Lady Lake offers authentic cuisine featuring a myriad of bagels and sandwiches that rival those to be found in the BIG APPLE.
When I ordered a coke, I was handed a CUBSTA CUP.  My jaw dropped!  Even in NEW YORK, everyone knows how great the Cubs are!
​ 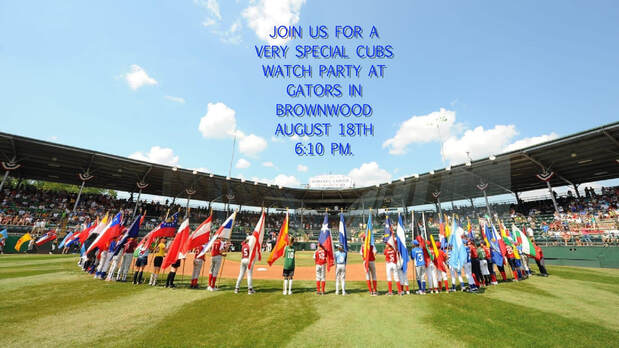 Pennant season is heating up, and every series is critical now. Come watch a historic game at Little League World Series Park in Williamsport , PA. Our Cubs Watch party will be on Sunday, August 18th at Gators Brownwood . First pitch is at 7:10 PM, but members can arrive as early as 6:10 to participate in Pick  a Cub, Predict the final Score, Squares, and 50/50 raffle. It’s getting serous now, so we hope to have a big crowd. Bring your white W flags to fly afterwards. 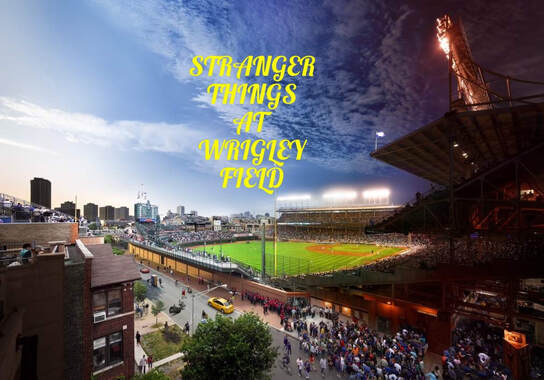 This is NOT a story about ghosts and spirits floating around.  It IS however about some of the amazing events other than baseball that have taken place at the friendly confines through the years.
For instance, back in 1915, for an additional admission to a game, one would be treated to a program of "HIPPODROME ACTS", which for all intents and purposes were basically circus acts.  Jugglers, clowns and a baseball pantomime artist named George Silvers entertained the masses.
I'm sure many CUBS WORLD members can remember when football was played at Wrigley.  But, did you know the BEARS were not the first Chicago team to do so?  The team was called the CHICAGO TIGERS.
Soccer was first played in 1931.  The European based GLASCOW CELTICS beat the CHICAGO BRICKLAYERS  6 to 3.
There have been boxing events, hockey and even SKI JUMPING!  Today, Wrigley has become quite a respectable concert venue.  Who knows what the future will bring to our beloved Wrigley? 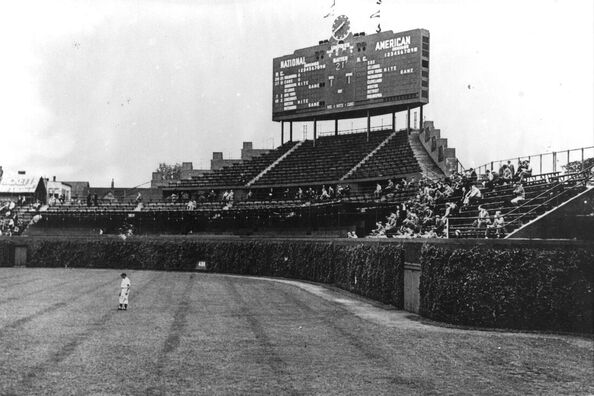 SMALLEST CROWD EVER    RECORDED AT WRIGLEY
We all know that Wrigley field is CRAZY BUSY these days due to a good team, improved amenities and  structural changes.  Even on slower days, the place is packed.
But, there once was a time during the pre-war period that Wrigley could barely sell a bag of popcorn.
This photo was taken in 1949 when the Cubs lost 93 games.  Records show that less a thousand people attended one of the games. The average attendance that year was 40,000 per game. 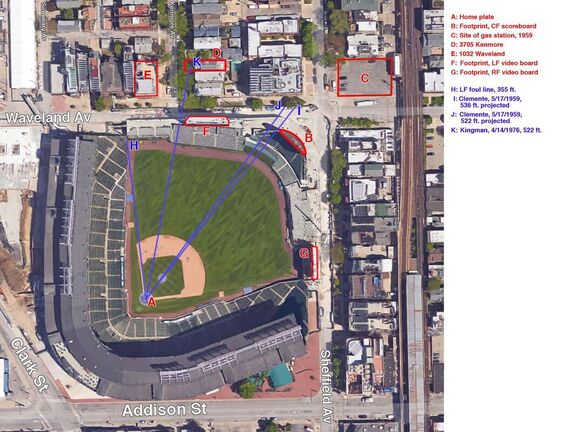 THE LONGEST HOME RUN EVER HIT AT WRIGLEY FIELD
The year was 1959 when Roberto Clemente hit a home run 536 feet onto Kenmore Ave.  No windows were reported damaged.
He also hit a home run 522 ft.  Talk about a long range missile launcher!  WOO HOO!
What Clemente did was without steroids or a corked bat.  However, I'm think I may have witnessed the mother of all home runs.  It was during a game in the sixties.  Ernie Banks approached the box and let one fly so hard and high, I am convinced to this day that the ball reached the Howard Street "el"! 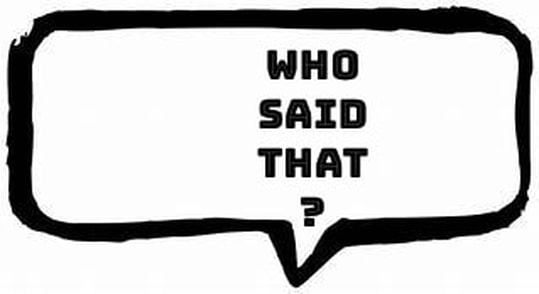 CUBS WORLD invites you to peruse five actual quotes about the Chicago Cubs spoken by various ball players (past and present) and assorted celebs.  You will find the answers on the bottom of this article.  SEE HOW MANY YOU CAN GUESS BEFORE YOU READ THE ANSWERS.

1.  "People ask me a lot about the values I got from playing for the Cubs for so many years. The value I got out of it was patience. A lot of people these days are not very patient."

2.  "Every player had a roommate for out-of-town games, so I had to slip into the bathroom early each morning and secretly take my insulin injection. I feared that if the Cubs found out and I slumped badly, they would attribute it to the diabetes and send me back to the minors - or worse, release me."

3.  "The Cubs, we built one of best farm systems - I think for a while there, it was the best farm system in baseball. And that was great. It got a lot of attention. But we didn't want the credit for the farm system. What we wanted was to see if we could do the tricky part, which was turn a lauded farm system into a World Series champion."

4.  "One of my best friends, James Miller, managed to find the only Cubs hat that is all red." 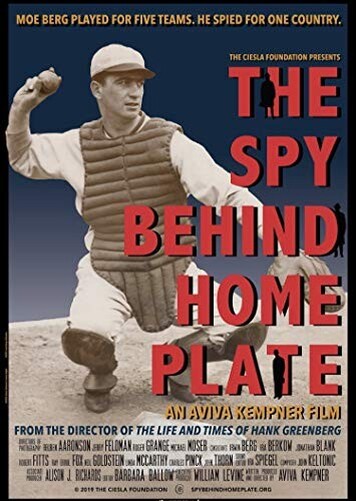 FANTASTIC FILM EVERY BASEBALL FAN AND PATRIOT MUST SEE!  RECENTLY AT THE VILLAGE'S RIALTO THEATRE.

The story of catcher Moe Berg would be a captivating tale if only his career in baseball was examined.  But, there are interesting layers to his life which are presented in a fine documentary that has been attracting audiences across the country.
The fact that Berg was never a Chicago Cub (although he did play for the White Sox for a short stint) is not important here.  What is truly interesting is that the man lived two extraordinary lives...one on a ball field and the other spying for the Americans as they gathered information about Hitler and the Nazis.
The film contains extraordinary footage of Moe Berg visiting Japan with his buddies Babe Ruth, Lou Gehrig and others in an attempt to improve relations via the two country's common passion...BASEBALL.  By the way, Berg was a highly intelligent man who learned Japanese during the trip overseas!  In total, he had a command of at least ten languages.
From Roosevelt to Einstein to Churchill, Moe Berg's acquaintances and friends were among the most celebrated people in history.  This is a film that will surprise and entertain you from start to finish!  Please don't miss it!  Also...look for this film on dvd and blu-ray very soon!