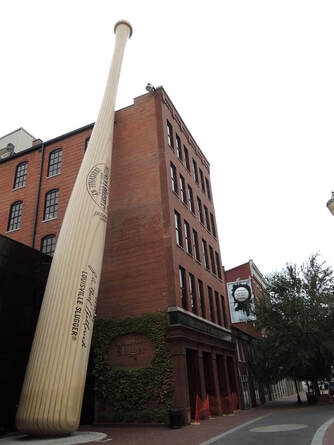 SIZE DOES MATTER!  JUST ASK KRIS BRYANT
If you've been paying attention to the Cubs of late you might've noticed that Kris Bryant's bat is hotter than its been in a long time.  Kris will be the first to admit that his numbers have risen and skills have sharpened due the the use of a bat called the AXE.
Many baseball players do not like when bats are tinkered with.  They're concerned about the kind of wood being used for manufacturing.  In fact, many are suspicious of something as small as color changes.
But the AXE has caught on with many players due to its tapered handle, which certainly makes holding it more natural and comfortable.  According to Bryant, the new design helps his  approach to mechanics which as a result has increased his swing efficiency and control.
Thinking back, I have wondered if such a bat would've helped my efforts in little league.  I don't think so.  Not even the bat in the photo would help me connect! 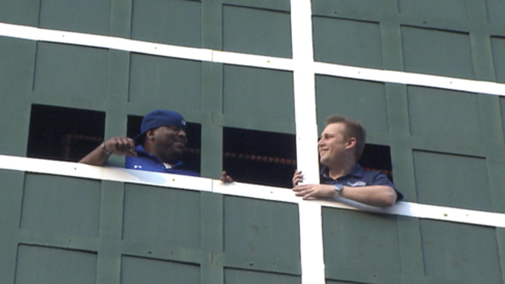 THERE'S A HOT TIME IN THE OLD SCORE BOARD TONIGHT!
Great view from up there?  NO DOUBT ABOUT IT!  Comfortable?  Only if you like working in a stifling hot enclosed area where the temperature can reach over 100 degrees.
But the men who operate the old school board know that they are preserving tradition...something very important to Cubs fans.  This board will remain for the long term!
Before these hearty souls even tend to business, they must take a laborious trip that includes walking up the bleacher steps followed by a special concourse which leads to another set of stairs.  THEN...you climb up a ladder into the structure.
No air conditioning.  No electronics for the exception of one man who checks his computer for scores and shouts out instructions to men on three separate floors!
They say the only time the score board will vanish is when Wrigley vanishes. 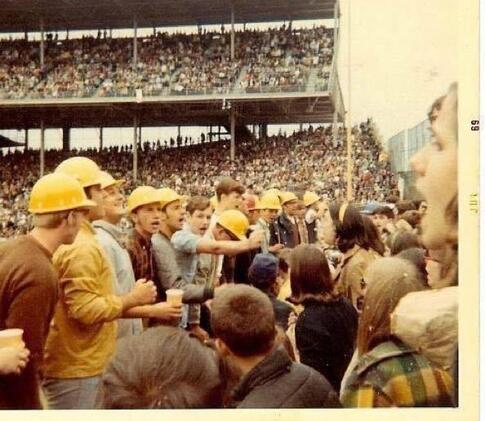 Well, it looks like the Cubs have separated themselves from everyone in the National League Central except for one team. We find ourselves neck and neck with the Milwaukee Brewers. Theo Epstein has done what many Cub fans have wanted him to do. Go out and find a bonafide, real, genuine, legitimate, real closer! And it sure looks like he has done just that! Theo went out and got Craig Kimbrel to sign on the dotted line for three years. Kimbrel has not played any baseball since last October. So, he is now in the minor leagues getting his arm in shape and should be in the Cubs bullpen in a couple of weeks, My guess is Carl Edwards Jr. will be the pitcher sent down to make room for Kimbrel.
And let’s not forget that Theo also went out and picked up eleven year veteran Carlos Gonzalez. Carlos has a .285 lifetime batting average and hit 40 home runs in 2015 for the Rockies. No doubt Joe Maddon will escalate his mad scientist lineups with the talent he has on this ball club.
I would also like to add I'm seeing more and more of these plastic yellow helmets out in the Wrigley Field bleachers these days. Looks to me like the 50th anniversary of the 1969 season is almost at full swing. Can it really be 50 years have gone by? Wow! 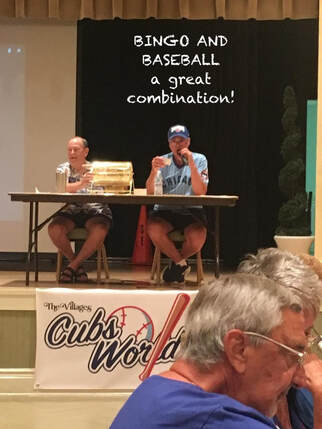 Cubs world members were treated to one of their favorite evenings playing Cubs bingo, Monday, June 3rd at Colony Cottage  Rec center. It was a celebratory evening for the whole membership. We had a large anniversary cake to share, as we celebrated our 2 year anniversary. Also, we were able to celebrate the end of an outstanding 2 year run by our entertainment chairman , Bill McMahon. Thank you Bill, for a job exceptionally well done.

The bingo part of the evening was great fun. We all had a list of 100 Cub players, past and present. They ranged from Thad Bosley  to Kyle Farnsworth, to Ryne Sandberg to Jon Lester. We than customized our own card to try to win one of 10 contests.

Dinner was catered by Lil Bits and was wonderful. We also had Bill McMahon conducting a nostalgia night, as many of us recalled some of our favorite memories from Wrigley Field.  There were Publix gift card winners from the word in red, and winners for the 50/50 raffle. 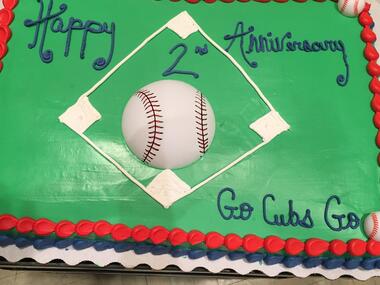 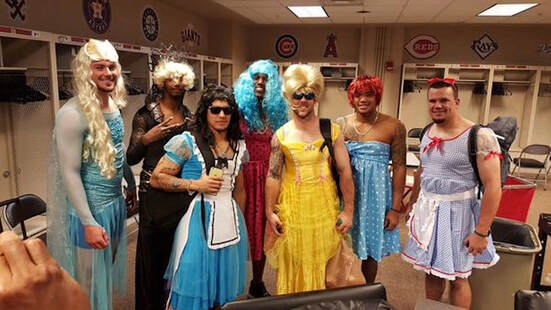 DON'T YOU JUST LOVE FASHION STATEMENTS?
It seems that the Chicago Cubs have been taking the fashion world by storm!  There are now different outfits being donned for each road trip on the schedule.  There are a lot of games left to play in the season.
As far as these dresses go...it looks like a promo shot for a new musical  LA CAGE A CUBS!  Lyric opera....WATCH OUT!!!!!

BREAKING NEWS!   AND WE DO MEAN BREAKING! 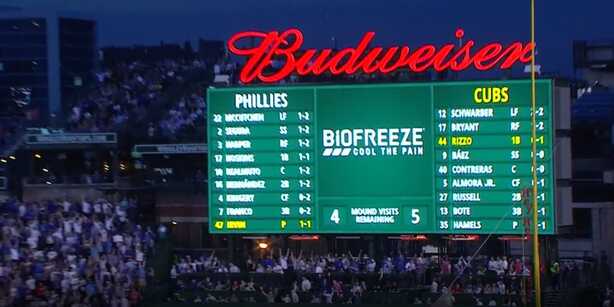 During a recent three run homer blasted out by Anthony Rizzo, the ball was hit so hard it reached the famous BUDWEISER sign and caused damage to the "D".  Ever since then, the CUBS WORLD CHATTER has learned that as a result of this incident, other ​neon signs around the world have begun to display burned out letters!  Scientists have offered no explanation for these occurrences. 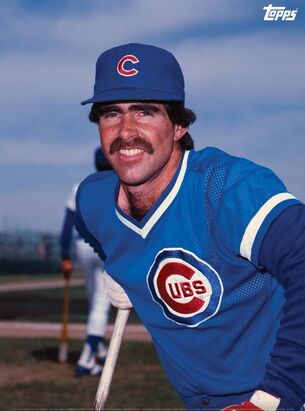 EX CUB, BILL BUCKNER, LOSES BATTLE WITH DIMENTIA    AT AGE 69
Some of Bill Buckner's most productive baseball years were spent with the Chicago Cubs.  He joined the North-siders in 1977.
But, unfortunately, his fumbled play that contributed to the 1986 World Series loss at Shea Stadium is an incident that has been cemented into the memory of Red Sox fans and has attracted the wrath of many unkind journalists through the years.
The play was a slow roller hit by Mookie Wilson which should've been an easy play for Buckner.  But the ball went right through his legs!  The game was lost because of that error.
​  In time, people have begun to realize that the constant harsh criticism of Bill Buckner was bitter pill to swallow.  Bill Buckner deserved better! 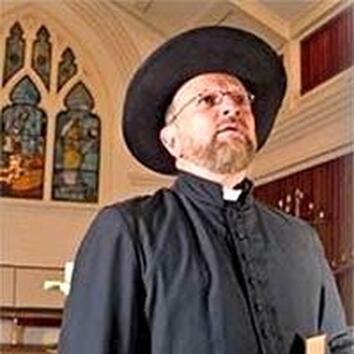 FROM WAYNE RICHARDS...CUBS WORLD ANTHEM
SINGER...
Do you know this man?
Take a good close look.  It's Wayne Messmer!  Yes...THE Wayne Messmer of Chicago Cub anthem fame!  Cub fans all over the world are familiar with his vocal offerings as he honors America with the "STAR SPANGLED BANNER.
Wayne Messmer stars in a one-man show  (DAMIEN)  by Aldyth Morri, that tells the true-life story of Father Damien, the Belgian missionary who volunteered to live, work and ultimately die among the outcast Lepers (Hansen’s Disease) who were exiled to a remote location on the Hawaiian Island of Molokai.
It is an honor for yours truly to sing the anthem for Cubs World in the tradition of Mr. Messmer.  But there is an additional connection now between us.  DAMIEN will be presented at the Skokie Theatre, just outside Chicago.  This is a wonderful venue where I have also performed.  I wish Mr. Messmer great luck in his new venture.
​ 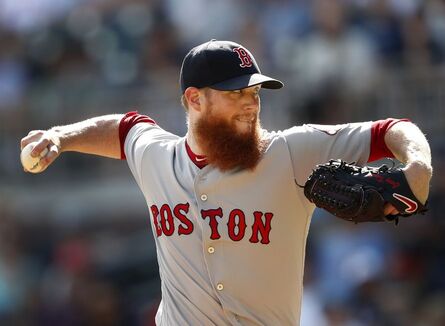 CUBS WORLD QUESTION OF THE MONTH
If a ball gets stuck in Craig Kimbrel's beard, would that be considered a ground rule double?
And now here's the REAL question.  Do you think our new right -handed acquisition will help the Cubs?  Is he worth the money?  Will this be another Darvish?  Let us know.  We always love hearing from you! 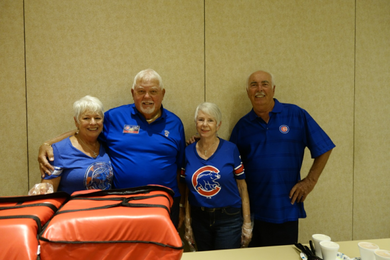 Good Meetings Start with Good Meals...
a message from our CUBS WORLD PRESIDENT!

There’s a new Cubs World team that you have met in recent meetings but may not yet know:
Member ALL STAR Meeting Dinner Team
Jan Jackman     Bob Smith     Ken Suchy     Karen Parrish

This team searches out the best meals available, negotiates the best price and serve the dinner
to start every Member Meeting.  They’re not content to simply order what we had before.
​ They take the time to explore how to vary the menu every month.  They begin as Master Chefs to plan the menu, put on their hats as caterers to serve the meal when it’s delivered, and finally serve us further
as ‘kitchen help’ to clean up.  All this within a tight budget and volunteer effort without an 18% tip!

One of the strongest requests you made in our latest member survey was to include a catered dinner
to start our Member meetings.  It was a great suggestion as “breaking bread” together is one of the most effective means of building interpersonal relationships.  Friends ‘doing dinner’ is perhaps the best way to start new friendships and make them stronger.  It’s the best thing we can do to strengthen our
club.
Our special team stepped forward to lead this key activity as soon as the Cubs World Board made this
their first priority upon receiving your  request.  So, as you pass through the serving line at the next meeting be sure to say “Thanks” for the contribution this team is making to the success of our club.