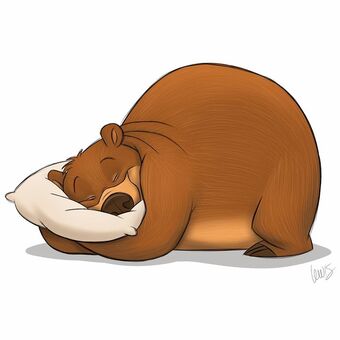 A GREAT SEASON AHEAD FOR ALL OF US?
It's hard to believe that pitchers are scheduled to report to Spring training in a matter of weeks!  That is if a regular schedule is adhered to.
When Clark the Bear heard that there would be no convention this year, he hybernated in his Winter home located in the Ocala National Park.  The staff at Cubs World are grateful that he allowed us to come in and photograph his....his lair.
The Cubs organization is very proud of Clark because he has represented the men in blue for various charitable organizations and brings joy to fans that, hopefully, will again fill the seats of the friendly confines.
Unlike many ballplayers that might be switching to other teams, Clark seems to be here to stay!  This is a good thing.  But, we do wish that somebody of authority sees to it that he wears pants!
LETS GO CUBBIES!  As Ernie Banks might say if he was around today..."LET'S HAVE FUN IN 2021!"

A SPECIAL OFFER FOR CUBS WORLD MEMBERS!
​by Dan Marx

Once again City Fire is offering a very generous discount that is available to all Cubs World members. This discount can be used at the Brownwood and Lake Sumter locations, and is good through March 1st. Please bring the coupon with you. You may use this coupon as often as you like during this time period.

Simply bring your phone and show the coupon as displayed here to your server.
Enjoy! 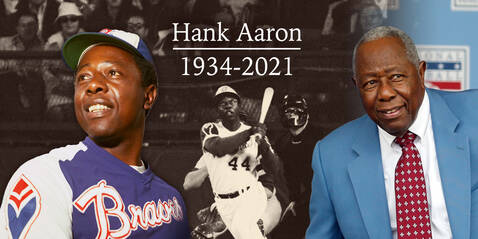 ANOTHER GREAT HAS LEFT US
​  The baseball world mourns yet another great..HANK AARON!  It is staggering to think of what he has accomplished WITHOUT the introduction of steroids.  He is a true champion, deserving of every accolade.
Tributes to this man should be held in EVERY ball park this coming season...without fail!
Cubs World is proud to invite you to enjoy a very short documentary about this amazing man. 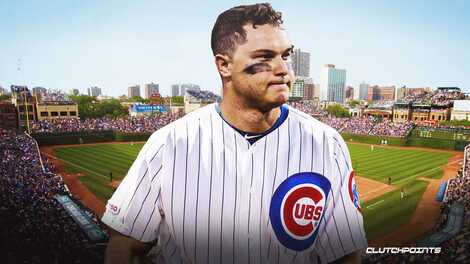 RIGHT OUT OF LEFT FIELD!
Joc Pederson is a player who desires nothing more than to hit the field every day.  The Chicago Cubs are  giving him that opportunity in 2021.
Said manager David Ross,“You’re going to be our guy in left field, save for the occasional rest day, same as anyone. But if we’re at the All-Star break and you’re hitting a buck fifty, you know….. we’re going to reassess. We’ll probably have to make a change.” 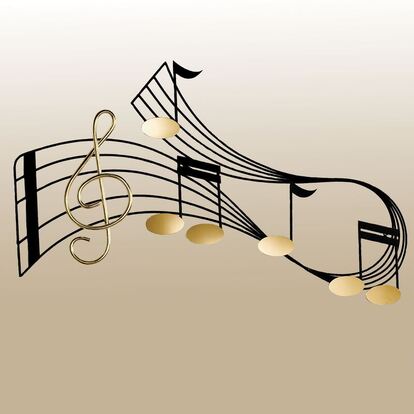 WELCOME TO THE FIRST EVER CUBS WORLD CHATTER MUSIC FESTIVAL!
​  Every Chicago Cubs fan in the free world is familiar with Steve Goodman's classic GO CUBS GO!  It is sung loudly and proudly with every win.
But, there are other songs that have been written and performed paying tribute to the Cubbies and we invite you to audition some videos and vote for your favorite!  Lets have some fun with this! 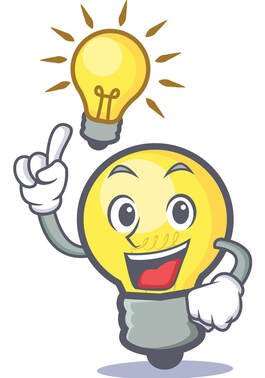 EVEN MORE BASEBALL PREDICTIONS FOR THE FUTURE

For several editions, Cubs World Chatter has featured a continuing series written by journalist  Chris Mueller which was contributed to us by our good friend Dave Gran.  We are very interested in hearing from our readership with regard to the predictions of the future of baseball according to this piece.  Please grade each projection or feel free to offer some thoughts.

14.    ​Bet big on this concept
Baseball should create an area in every stadium, perhaps one section, where each seat is outfitted with a portable, personal sports betting device. One of the major online sports books can sponsor it, or offer its technology, and fans willing to pay a premium price can wager on everything in the game in real time, down to whether the next pitch will be a ball or a strike. Have ushers dedicated to getting those fans drinks and food, and watch as that section fills up, even for the most boring, blasé matchups. Bonus: The rest of the fans in attendance get to watch grown-ups cry about pop-ups to the shortstop in an 8-1 game.

The last outdoor day game at the World Series was in 1984, when the Tigers finished off the Padres in Game 5. The average baseball fan isn’t getting any younger, and late-starting playoff games, particularly the World Series, are a turnoff for many. Want to get kids more interested in the sport? Start a game — make it a weekend affair — closer to noon than dinner time. Prime time is overrated.

Every team in the sport is awash in cash thanks to bountiful local and national television deals, but many fans have cut the cord with cable and are unable to watch their favorite team using MLB.TV because of local blackout restrictions. It’s a problem with an easy solution: Mandate that every regional sports network have a streaming service, and charge fans a nominal monthly fee for access to the games. Who loses (besides obscenely rich cable company executives)?

​Absolutely... ahh... well, no.
Listen up: Marathon extra-inning games are occasionally fun, but more often than not, they’re just boring. Baseball ought to take a page from the NHL’s playbook, and if a game goes 12 full innings and is still tied, a best-of-five home run derby should decide it. Each team can pick its representative, and that player can decide who throws the pitches. The most home runs on five swings wins. 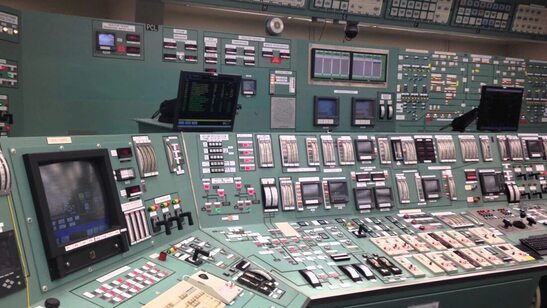 ALGORITHM PLACES CUBS IN DECENT POSITION FOR 2021!
by Wayne Richards
The time has come for the PLAYER EMPIRICAL COMPARISON AND OPTIMIZATION TEST ALGORITHM to release their baseball standings predictions for 2021.  For Cubs fans, it looks like we're in the running for this year's championship!
Perhaps these numbers are juggled around within a huge industrial computer like the one in the photo, or perhaps there is a mere wizard working behind a curtain!
The inventor of this process is an Indiana born American statistician named Nate Silver.  The forty three year old attended the University of Chicago.
His software is also used to make predictions for football, basketball and even elections.  In 2009, Nate was chosen by Time magazine as one of the 100 most influential people.  (Wonder if he'd like to go with me to Vegas?)
Silver is the winner of a Webby Award for his highly popular blog site called FIVE THIRTY EIGHT.  As if that wasn't enough,  he is a correspondent for ABC news.
If the predictions work in favor of the Chicago Cubs, he will have to add "HERO" to his list. Otherwise, it's back to OZ!

TONY IS READY TO REPORT TO CUBS WORLD FROM SLOAN PARK......if !
First of all...DO NOT PANIC!  The Cubs have not changed their logo.  This has been and will continue to be the official spring training logo for all who travel to Sloan Park in Mesa, Arizona.
Our good friend Tony Diliberto is very familiar with that logo.  He lives close to the beautiful state of the art Cubs facility and regularly attends games.
Tony and our Cubs World anthem singer (featured in the next article) have been friends for years.  From the warmth of Arizona, Diliberto has kept in touch, sharing information about the Cubs that he hears and things he has witnessed at the park.  He has been known to say, "If I lived in Florida, I'd be all over your club!"
This year, Tony has once again offered to report on the Cubs.  However, covid restrictions dictate that only 3500 fans out of 15,000  will be allowed in the Park per game.  Procuring tickets might be tough, but our roving reporter will do his best. 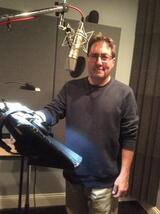 THE OTHER WAYNE
by Dan Marx
You may know Wayne Richards from being our national anthem singer, but did you know that Wayne made his living as a professional musician ?
Born in 1951 and growing up in Rogers Park helped shape Wayne Richards' love for his beloved Cubbies and his more beloved passion for music.
Living so close to Wrigley, he would take the EL many times to see the Cubs play, especially during the summer. It helped that his whole family was also Cubs fans. He loved eating nachos in the bleachers before it was “cool” to sit in the bleachers ( aka Bleacher Bums). And his favorite game in person was watching the tribute the Cubs gave to Greg Maddux when he was retiring.
Growing up , Wayne started playing piano the age of 3. He has always had an amazing ear for music, and rarely even uses sheet music. Once he finished college as a theater major and his 2 year active duty in the Naval Air Force, Wayne decided to pursue music full time.
On the fun side, he sang the national anthem a number of times at Comiskey Park. Of course, that was a dilemna for him, but, hey, a gig is a gig. He said that singing in in a lounge while playing piano, he was more nervous than while singing before 35,000 to 40,000 fans.
Wayne's career has taken him from all over the midwest to Scandinavia. There is Pheasant Run Resort, Eagle Ridge Resort, and Big Shot Piano Lounge and Resort in the Chicagoland area to name a few venues where he has performed .  Wayne is also a noted playwright and composer, and has written over 20 film scores.
When asked about who the most famous person he ever met was, he quickly said Frank Sinatra. Wayne performed at Frank's private party and was fortunate enough that Frank came over to chat with him for  20 minutes afterwards. His favorite non entertainment personality was Jack Brickhouse whom he was able to get together with and have lunch with him a few times.
Currently, he loves being retired and he performs regularly in Summerfield at Morgan's Music Junction. He loves working at the Junction because he gets to work with very seasoned and talented musicians.
He and his wife Annie have loved being in Cubs World ever since they moved here. 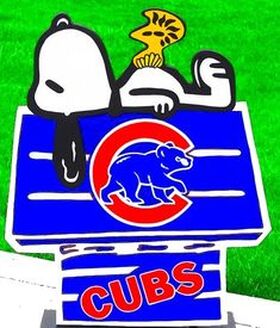 AH SPRING!
Soon the pitchers will be reporting to Arizona.  The reporters will report on the pitchers that have reported.  AH!  We need this.  We need this so bad!
We are also thrilled that membership meetings are returning!  There are plans for watch parties.
In the meantime, we will do everything we can to make your newsletter entertaining and informative!
GO CUBBIES!!!!!