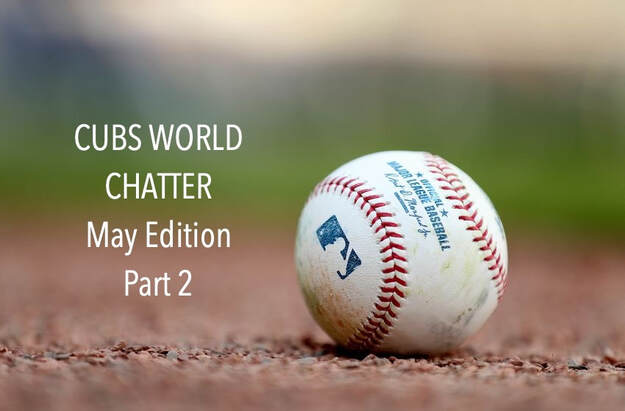 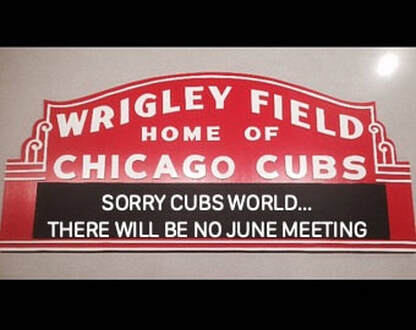 The CUBS WORLD membership meeting has been cancelled for June.  But, please keep checking e-mails and this newsletter for any further announcements.
This is a very difficult time for anxious baseball fans as the MLB coordinates with medical and governmental entities to come up with a plan to get action going again.  In the meantime, until there is some road map released for the direction we must take, we will be doing everything we can to keep you entertained and informed.
Just as in April and May, there will be 2 editions of the JUNE CUBS WORLD CHATTER newsletter coming to a computer or electronic device near you.  GO AWAY VIRUS!  GO CUBBIES!
​ 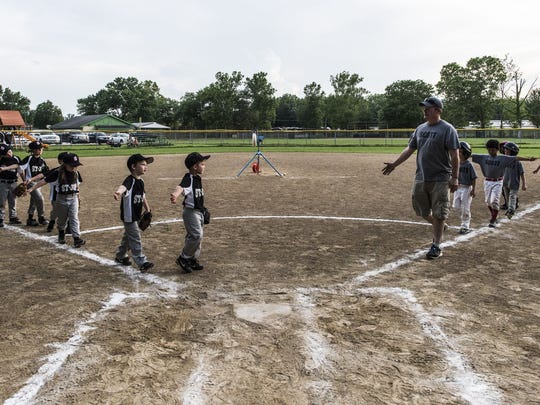 NO RUNS!  NO HITS!  N0 GAMES!
Cubs World is a supporter of youth baseball.  Our club president, Don Mulder, has stated this time and time again.
​  This is a very sad year for youngsters craving an opportunity to hit the field.  No official decision has been made about when and where games might begin.  Sadly, LITTLE LEAGUE has been cancelled for the year.
Many youngsters are having a difficult time understanding the situation.  Cody Hill, sports writer for the Village's DAILY SUN, has a seven year old son who plays little league and soccer.  "Do your best to keep kids occupied, " says Hill.  " Be honest about things."   That is great advise during such troubled times. 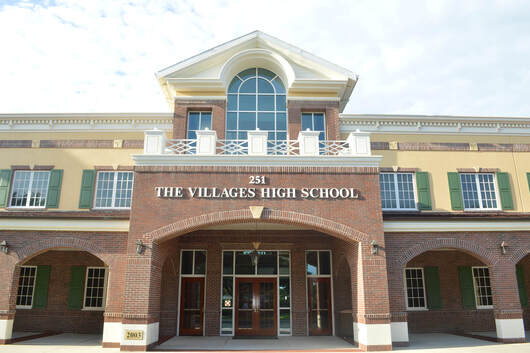 VILLAGES BOOSTERS NEED MORE SUPPORT
by Don Mulder
A straw poll in the March Cubs World membership meeting revealed that few members are Village High School boosters.  Perhaps the reason is the VHS boosters don't boost the baseball program very much.
​  But, did you know that it is not unusual to see MLB scouts in the grandstand?  They're looking for prospects able to handle the 90 plus mph. pitching.
The Cubs are looking to draft one of the VHS pitchers expected to go in the third round this year.  He may be faced with the choice of playing in college or going pro right out of high school just like another recent Florida high school phenom, Javy Baez.
TO CUBS WORLD MEMBERS A QUESTION....Do you think Cubs World should take a closer look at VHS baseball? 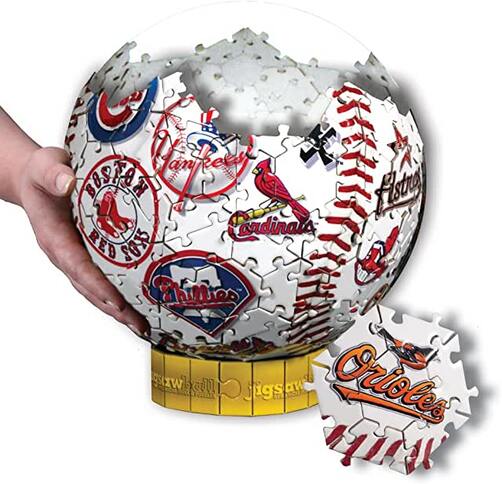 HAVE A BALL WITH A BASEBALL BALL!
According to the toy industry, jigsaw puzzles have been selling like crazy with people spending so much time at home.  In particular, jigsaw puzzles have re-gained a high level of popularity.
Naturally, this reporter thought it would be interesting to find out if there were CHICAGO CUBS puzzles around.  The good news is there are many of them on the market.  The bad news is that most are currently unavailable.
​  However, Amazon has an intriguing spherical challenge in the form of a spherical baseball themed puzzle loaded with logos.  With the baseball world a bit shattered this year, it might be fun to piece it back together symbolically. 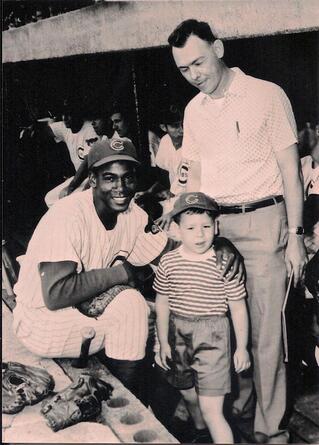 BRUCE MILES SHARES SOME  MEMORIES
My first brush with Cubs greatness came in 1962, when I was five years old. My dad, Si, already had taken me to my first game, and I was eager to go again.
But this time, it was going to be special.
My aunt had known TV announcer Jack Brickhouse, and she arranged for me to meet Jack as well as Ernie Banks, who was my favorite player as a young fan. Jack greeted us in the stands, and not only did I get to meet Ernie, I got to go into the dugout and have my photo taken with him. Jack was kind enough also to introduce me to Billy Williams, Ron Santo, George Altman and others. Even at that young age, I was a big baseball fan, and I knew all the names and uniform numbers.
Even though that was a lifetime ago, I still have fond memories of that special day.

Bruce Miles is the sports writer for the Daily Herald and also a great friend to Cubs World. 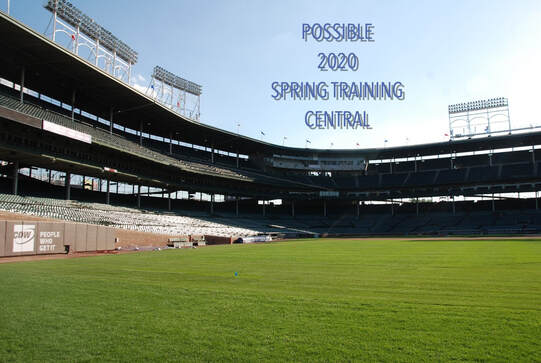 When and if plans for a major league baseball season come to fruition, don't be surprised if Wrigley Field will be used for the second spring training session of the year.  Other teams around the country may follow suit and train on their own home fields.
It is NOT likely that any fans will be seen in the stands, even with the implementation of
social distancing.  This is not just for the training period, but for the regular schedule, whatever that might pan out to be.
So, Cubs World members, please share your thoughts with us.  Do you think there will be any kind of season this year or will they pull the plug until 2021? 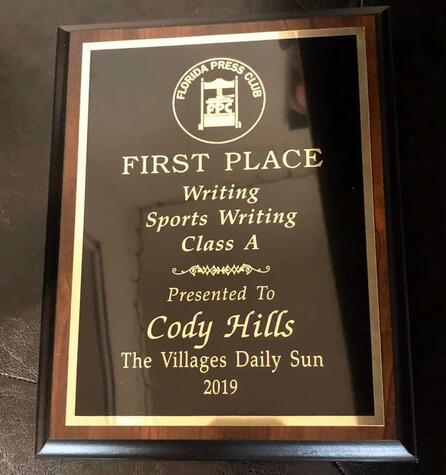 AWARD WINNING LOCAL SPORTS WRITER LOVES THE CUBS
At the tender age of 28, Cody Hills accomplishments are quite impressive.  As it turns out, this talented award winning sports writer for the Daily Sun loves the Chicago Cubs.
Born in Iowa City, Iowa, Cody's interested in baseball was due to his father's enthusiasm for the game.  "My father was a St. Louis Cardinals fan, " admits Hills.  "I was a bit of a rebel and that's why I turned to the Cubs".
​  Cody had other aspirations before becoming a writer.   He was working very diligently toward a career as a fire fighter EMT and also took an interest in transportation.  But, the winds of fate brought him to the Village's Daily Sun where he was first hired as a clerk and eventually took on the position of sports reporter.  He covers events at the Villages High school.  "I would eventually love to cover college sports, " says Hills.
With Jenna (girlfriend) Hills has two children....Seven year old, Carson ( little league baseball and soccer enthusiast) and Summer who is five.   Sports is in this family's blood.
Cody is always willing to make observations, especially when the subject involves the Chicago Cubs.  When asked about David Ross becoming the new manager, he proclaimed without hesitation, "I had a chance to meet Ross after the series.  I love the idea of him being the  manager.  He will recycle new energy!"
Many agree with Cody.  It would be nice to see a season actually begin.  When it does, we know that there will always be enthusiasm in the words of Cody Hills.

LOGOS COME AND GO
Before the Chicago Cubs were the Cubs, they were known as the Chicago Orphans.  An early logo (not seen in this chart) was created in 1898 and consisted of an ENGLISH styled "C", which represented Chicago.
In 1906, when the team name was changed to the Cubs, they maintained that lettering until 1906, when a new design was introduced.  The color was brown.
Speaking of brown, the first bear adoring a logo made his debut in 1908.  he is the great , great grandbear of Clark.
Perhaps the most dramatic and interesting logo design came around in 1918.  The boxy appearance probably threw many people off because it was only around for one season.
The 1948 design is a bit of a mystery.  It's jagged open end looks as if somebody took a bite out of it.  Or maybe the logo designer was drunk. 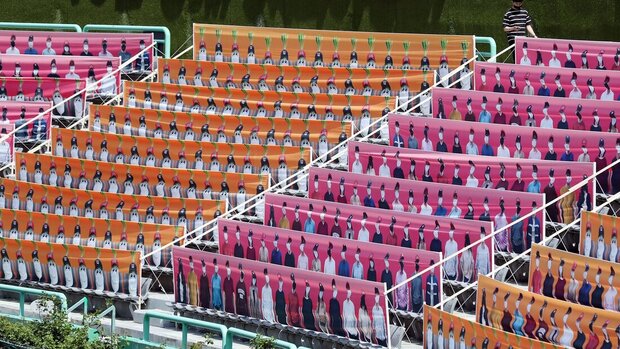 THE STANDS ARE CURRENTLY FILLED WITH A BUNCH OF STIFFS!
There's good reason for that.  They're made of cardboard.  These colorful, yet very quiet  fans can be found in South Korea, the only area in the world where active baseball is currently taking place!
Just for an added dimension of interest, some ballparks have installed robots to cheer and make noise! 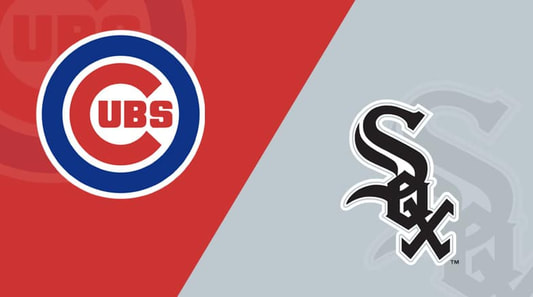 TRUE RIVALS
How would you feel if I announced that the Cubs and Sox would be playing each other in the SAME DIVISION?  Well...believe it or not this is an option MLB is not only considering for a shortened schedule this year, but for seasons to come!
​  There actually has been a gradual move to encourage this new set up.  We've had inter-league play for a couple of decades and there are no longer American or national league umpires.
How do you feel about the potential elimination of the leagues?  How do you think it will effect the Cubs?  Feel free to let us know!  We'd love to hear from you. 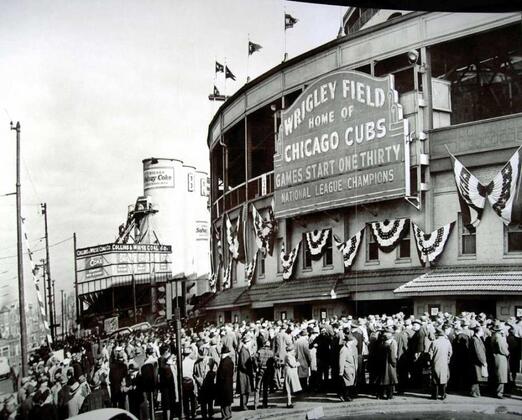 DID YOU KNOW?
At one time, many moons ago, it was possible to get to Wrigley field via freight train.  Construction crews working on friendly confines renovation project have discovered old track that ran along the street.
Those uncomfortable freight cars didn't seem to bother folks who desired to visit the friendly confines.  There was also a street car that would let people off right where the Ernie Banks statue now proudly stands.
Wrigley was a jewel in a neighborhood resplendent with silos and coal bunkers...a far cry from the Wrigleyville of today.
​ 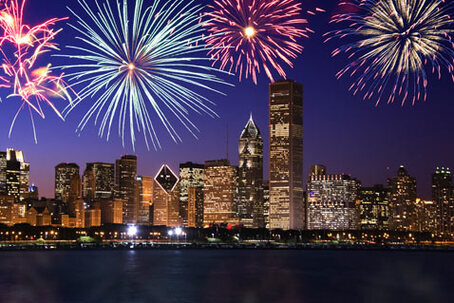 THIS JUST IN!!!!!
Major league baseball has announced that a shortened 2020 season could begin in July, with a second spring training session to begin in Mid June.  How exciting would it be to open the season on Independence day?  America needs a treat like that!
Ball club managements are enthused about the idea.
By the time the next Cubs World edition is released on June 1st, more information should be available.  In the meantime, keep your chin up.
Baseball will be back...one way or another!
​  See you in the June edition!