One of the most amazing productions I've ever had the pleasure of participating in was Blacklisted, a highly creative and important work written and produced by Carla Gordon.  This is one of those shows that has a special energy and magic and to have had the opportunity to share the stage with an amazing array of legendary Chicago talent.  May this show live forever! 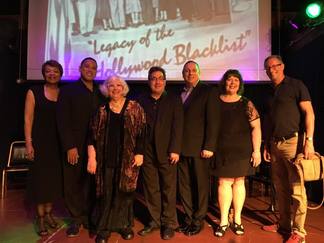 BLACKLISTED HAS BEEN PERFORMED IN FRONT OF         SELL OUT CROWDS!  IT HAS MADE CABARET HISTORY!

Throughout history, the United States has managed to witness many politicians and their followers who had very narrow thinking and were bullies to push their own agenda. In 1950 Senator Joe McCarthy was a politician who thought that communists were residing in the United States. Therefore, he thought it was important to identify communists or people who had connections to communists in order to protect the United States. Therefore, anyone who had adverse opinions with the government or demonstrated a certain way of thinking through their art was targeted. People were called before the House Un-American Activities Committee (HUAAC).

If they were deemed a communist or had a connection with communist, or even a different way of thinking, they were blacklisted. This was true with the entertainment community especially Jewish movie writers and producers. This meant, writers could not share their stories, singers could not share their songs, and actors were not hired to act. Even though through the United States Constitution promises the right to speak, vote, and pray as you wish.

Blacklisted: “A Concert of Songs made famous by Blacklisted Artists” which debuted at the Holocaust Museum in Skokie, Illinois last Sunday afternoon, took a look at what wonderful music we would miss if particular singers and songwriters were not able to share their gifts. Singer, Songwriter, Producer Carla Gordon had a vision for this show, and her vision became an interesting and entertaining reality with “Blacklisted”. Along with Carla Gordon, this SRO sold out performance featured Chicago’s finest from the Chicago cabaret, and music community delightfully included Joan Curto, Robert Sims, Paul Motondo, Wayne Richards, Rabbi Barry Schecter, and Musical Director, Singer Beckie Menzie at the piano.

Carla told the story and highlighted just a few of these well known artists which included actors Judy Holliday, and Zero Mostel, composers Leonard Bernstein, Marc Blitzstein, Elmer Bernstein and Yip Harburg, singers Hazel Scott, Lena Horne, and Paul Robeson, and writer Studs Terkel. Carla’s story was compelling, adding bits of humor. Carla’s message, “Could you imagine what would happen if the blacklist was not lifted, and we were deprived the talents from these artists?” Thankfully, the original artists were able to continue their talents after their blacklist was lifted.

The singers joining Carla on stage continued Carla’s story with their music. The most notable performance was Robert Sims singing “Ol Man River emulating singer Paul Robeson’s Show Boat performance. Robert’s wonderful bass voice recreated Robeson’s magical moment in Showboat where the words “I’ll keep laughing instead of cryin and I’ll keep fightin instead of dying” brought meaning to what many of the blacklisted artists experienced. Robert’s velvety voice also sang Maria from Leonard Bernstein’s West Side Story. Paul Motondo crooned Old Devil Moon and Somewhere Over the Rainbow by songwriter Yip Harburg. Paul’s interpretation of Somewhere Over the Rainbow was wonderful mixing speaking and singing some of the lyrics which made the song especially meaningful. Joan Curto gave a moving performance with Lena Horne’s Stormy Weather and honored Judy Holliday with Just in Time. Beckie Menzie told the story of Hazel Scott how she was blacklisted and was forced to move overseas to perform. Beckie then sang and vamped Honey Suckle Rose with her brilliant jazz artistry. Later Beckie honored writer Marc Blitzstein with I Wish It So, a beautiful song which Beckie’s voice soared and left the audience with emotion.

The highlight of the afternoon was singer, composer Wayne Richards. Wayne started with a story about Charlie Chaplin and honored him with Smile with Rabbi Barry Schecter accompanying Wayne on the violin. Wayne played the piano featuring a movie music medley by Elmer Bernstein which one of his famous scores was from Thoroughly Modern Millie.

Carla joined Wayne on stage creating a magical chemistry honoring Zero Mostel with Do You Love Me from Fiddler on The Roof. The songwriting team of Carla Gordon and Wayne Richards did not disappoint with their new composition, Prayer for America brought as moving climax to the afternoon’s performance. This song illustrated that the true America is our history and our families who make dreams a reality.

After a story where gospel singer Mahalia Jackson supported Studs Terkel’s decision not to name any known communists by continuing with her show after telling television producers “If Studs goes, I go. Continuing with the heart of the performance, the entire cast honored Mahalia Jackson and sang He’s Got the Whole World in His Hands, inviting the audience to join them. The finale ended with God Bless America, which brought a moving conclusion to the Blacklisted performance, along with a standing ovation.

Carla Gordon’s message was that Joe McCarthy and J. Edgar Hoover were bullies in 1950. It is unfortunate that some of our current political representation also has its share of bullies. Hopefully, in 2016 we will not witness the ignorance and prejudice from 1950. In the words from Prayer for America, “Freedom is a gift for everyone with a prayer for America. Hold onto the dreams that others deny. Freedom is yours Freedom to fly”.

I highly recommend Blacklisted. Carla Gordon truly put her heart and soul into this wonderful story and performance. There is another sold out performance on February 28 at the Skokie Theatre. So stay tuned, future performances are being planned. Don’t miss revisiting this moment in history!

'Blacklisted' premiere
What an inspired idea: A concert of music written or famously performed by artists blacklisted during the Communist witch hunt of the 1940s and '50s.

Not surprisingly, there was not a spare seat to be had Sunday afternoon at the Illinois Holocaust Museum & Education Center, in Skokie, a fitting location for a program confronting the consequences of persecution.

Chicago singer-songwriter Carla Gordon conceived the project and convened several of the city's top performers to tell the tale. Among the highlights: Robert Sims bringing ardor and a glorious baritone to "Maria," from "West Side Story," in homage to Leonard Bernstein; Joan Curto conjuring plenty of brass and rhythmic sway in "Just in Time," as a tribute to Judy Holliday; Carla Gordon and Wayne Richards lovingly performing the "Do You Love Me?" duet in salute to Zero Mostel; Paul Motondo with a poetic reading of "Over the Rainbow," in remembrance of lyricist Yip Harburg; and Beckie Menzie playing piano elegantly at all tempos and many styles, especially jazz.

Tightening Gordon's moving narration a bit would make an attractive show that much more effective, and there's time to do so, with "Blacklisted" to be repeated.

"Portraits in Jazz": Howard Reich's e-book collects his interviews with Frank Sinatra, Lena Horne, Ella Fitzgerald and others, as well as profiles of early masters such as Louis Armstrong, Duke Ellington and Billie Holiday. Get "Portraits in Jazz" atwww.chicagotribune.com/ebooks.


Last Sunday afternoon I went to the Skokie Theater to see the sold-out performance of Carla Gordon’s powerful cabaret show, Blacklisted.  When I walked into the lobby, the place was rocking.  A trio of spirited folk guitarists with plenty of gray facial hair were serenading the crowd with “If I Had A Hammer” and folks were singing along. I couldn’t help belting out with them: “It’s the bell of free-ee-dom…”  What joy to freely express your voice through music!

Too bad the guy who wrote that song, Pete Seeger, was silenced during the 1950s, along with hundreds of other brilliant artists suspected of ties with the Communist Party.  The show I was about to see would transport us into this dark moment in history, when thousands of innocent Americans lost their jobs during the the government’s crusade to conquer the “Red Menace”.

Upon taking our seats in the theater, the audience’s attention was drawn to a screen onstage with slowly-shifting photos…gorgeous black & white publicity shots of famous writers and performers who were on the “Hollywood Blacklist.”  The audience was surprised by some of the artists included.  We found ourselves exclaiming “Hmm!” and “Oh!” a lot.  This was a chorus that would underscore the entire performance.

Seven sharply-dressed performers entered the stage and took their places, Beckie Menzie on the right at the baby grand piano, Carla Gordon on the left at the podium.  With a perfect balance of historical info, personal anecdote and commentary, Gordon welcomed us to Blacklisted.

The first slide showed Judy Holliday. (Audience:“Hmm!”)  Gordon told us a bit about the famous “dumb blonde” with an IQ of 176, then passed the ball to Joan Curto.  Taking center stage, Curto honored Holliday with a fun anecdote and a swinging rendition of Just In Time.

Next up was Charlie Chaplan.  For this homage, Wayne Richards took center and melted our hearts with Smile, informing us that the song was written by Charlie Chaplan.  (Audience:“Oh!”)  Rabbi Barry Schecter’s violin solos added pathos to the performance.

Honoring a lesser-known super-talent named Hazel Scott, Beckie Menzie blew the roof off the place with Honeysuckle Rose.  Really… as cool as that song is, only Menzie could stoke it into a showstopper!

One of my favorite lyricists, Yip Harburg, was represented with three great songs:  Old Devil Moon and Somewhere Over the Rainbow, sung beautifully by Paul Motondo, and When The Idle Poor Become the Idle Rich, a wise and witty satire, skillfully handled by Gordon.

Two of the show’s most wowing moments happened when Robert Sims stepped up to the mic.  Sims, a young, African American baritone with a monster resume, poured his soul into Leonard Bernstein’s Maria with gut-wrenching tenderness.  Later, in tribute to the great Paul Robeson, Sims presented an alternate version of Ol’ Man River containing bold protest lyrics that were written and performed by Robeson later in his career.

Other blacklisted artists spotlighted in the show included:  Elmer Bernstein, Lena Horne, Zero Mostel, Marc Blitzstein and Chicago’s own Studs Terkel.  All selections were treated masterfully by this exceptional cast.

As the quick 90-minutes drew to a close, Gordon sang a touching original song, Prayer For America, written in collaboration with Richards.  One of her parting comments, “In politics, there is a bully in every era,” drew chuckles from the audience.  Gordon continued, “Judging from your response, I sense you might think there’s a bully currently in our political system.  We are not naming names.”  Again we laughed, grateful that the days of interrogation by the House Un-American Activities Committee are over, but wary of continuing patterns.

Having been warmed up in the lobby, we all joined voices in the final song, God Bless America. Piecemeal we rose to our feet, gradually and organically ending in a standing ovation.

Pam Peterson is a Chicago cabaret artist and writer.  (www.pampeterson.net)